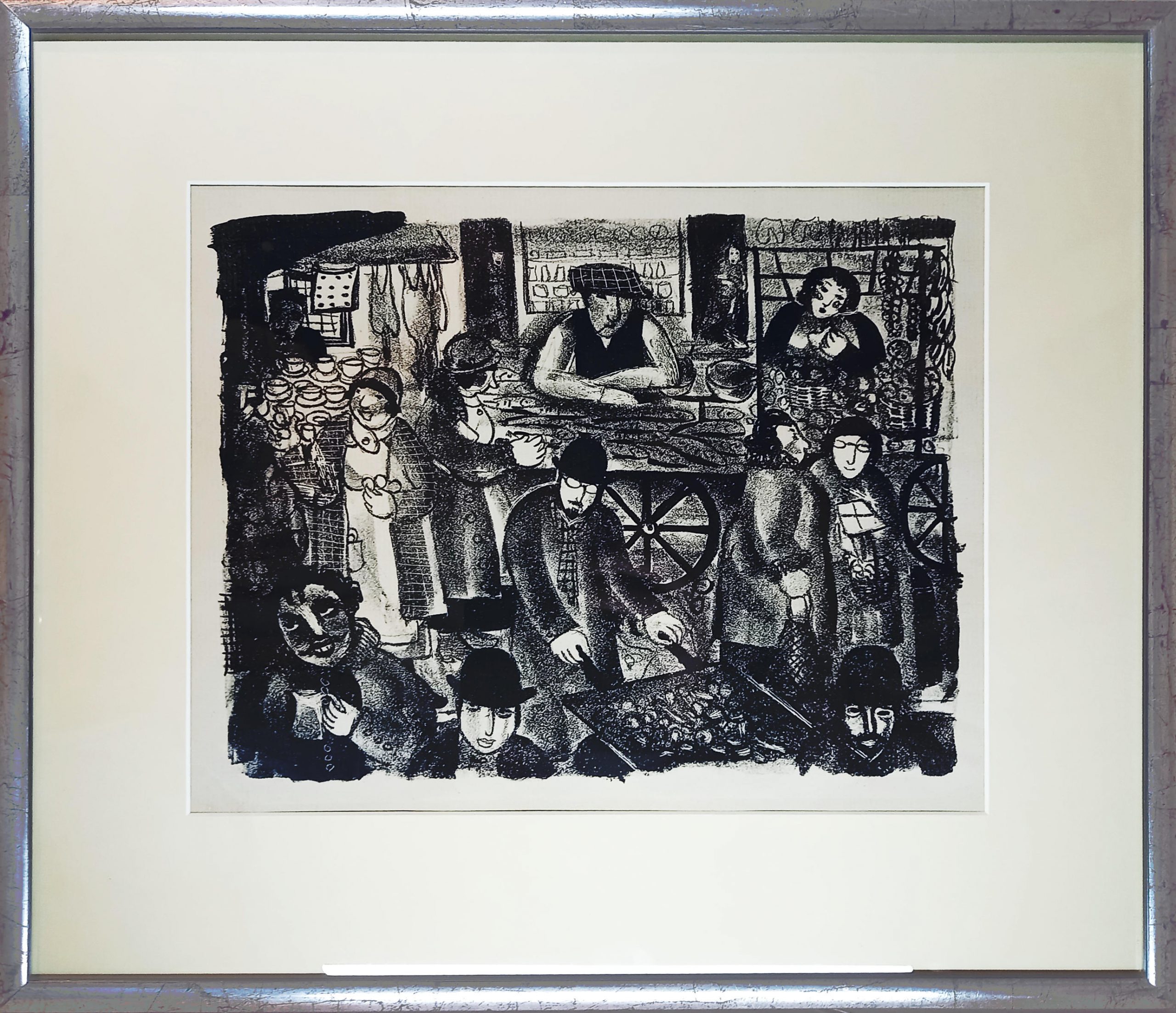 Pearl Binder (Lady Elwyn-Jones) was a British writer, illustrator, stained-glass artist, lithographer, sculptor and a champion of the Pearly Kings and Queens. She was a legendary character who had a lifelong fascination with the East End of London, where she settled in the 1920s. In 1974 she became Lady Elwyn-Jones, when her husband the politician and lawyer Elwyn Jones was appointed Lord Chancellor and made a life peer, taking the title Baron Elwyn-Jones.

Pearl “Polly” Binder was born in Salford in Greater Manchester. Her father was Jacob Binderevski, a Jewish tailor who came to Britain in 1890 and shortly afterwards became a British citizen.

Binder moved to London after the first world war and she studied art at Central School of Art and Design, with a focus on lithography. In this time Binder drew scenes from everyday life in London that she made into lithographs.

This work is from a series she published that also illustrated The Real East End by Thomas Burke, a popular writer who ran a pub in Poplar at the time. Binder’s illustrations are an intimate, first-hand portrayal of grimy London life in that era. In the print you can see a chestnut seller at the front. China, fish and fruit stalls at the back with the shoppers, and prostitutes in the background doorways. At this time she was living at Spread Eagle Yard, Whitechapel.

In 1933 Binder was one of the founders of the left-wing Artists’ International Association. In 1937 Binder was involved in the earliest days of television broadcasting for children. Also in 1937, she co-presented Clothes-Line with the fashion historian James Laver. This live six-part series was the first television programme on the history of fashion. As she did not give birth to her daughter Josephine until 6 January 1938 – less than a month after the last episode transmitted – Pearl Binder could well have been the first heavily pregnant woman to appear on television.

In the course of her life Binder travelled extensively in Russia and China, designed a musical, designed costumes for a theatre company, wrote stories for children, designed a Pearly mug and plate for Wedgwood and instigated and executed a series of armorial windows at the House of Lords.

This work is not one of the reduction prints for the book but a proof lithograph taken from the stone. It’s a typical market scene that Nigel Henderson also photographed in the 1950s. Framed and glazed. Unsigned proof.