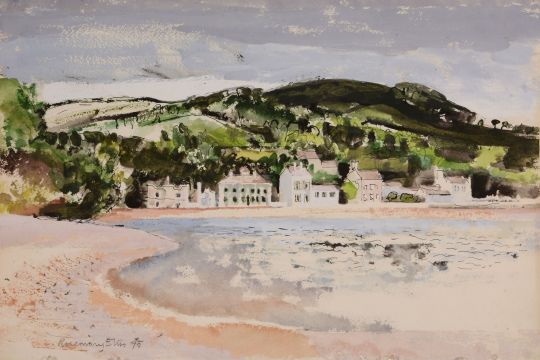 Rosemary Ellis née Collinson was born in Totteridge, North London in 1910. Her grandfather was the leading designer of furniture company Collinson & Lock and her father trained as a cabinet maker and started the firm Frank Collinson & Co.

Rosemary’s father served in WW1 in France and Italy. Having survived this conflict he died of Spanish Flu in 1919 and so Rosemary and her siblings moved in with her mother’s parents in their large house at Netley Marsh in the New Forest. In this environment she developed a love of the forest and its animals. Some time later, the family moved to London.

Rosemary went to study art at the Regent Street Polytechnic in 1928. It was here that she met her future husband Clifford Ellis who was her tutor at the Polytechnic.

Clifford and Rosemary Ellis were at once husband and wife and an artistic partnership. Their collaboration began in 1931, the year of their marriage, and subsequently almost all their published freelance work is signed jointly. By the time the New Naturalist jackets were designed they had taken to using the cipher C&RE to express their joint authorship. Such consistent use of a joint cipher is unusual, and needs a little explanation. The initials were put in alphabetical order, not out of any sense of seniority. †

The couple as artists and designers joined the ranks of Ben Nicholson, Eric Ravilious, Barnett Freedman and Edward Bawden as artists who could create both posters for advertising and book dust jackets. They would join many of these artists in working for Shell Mex and for London Transport on posters.

Work that would welcome further investigation includes posters by Barnett Freeman, Edward Bawden, Richard Guyatt and Clifford and Rosemary Ellis. Another area that was constrained from further investigation by lack of space was the way in which Beddington provided opportunities for women to produce art for commercial use. Women artists were given very little press attention in the 1930s and, although artists such as Barbara Hepworth were active exhibitors, critics rarely reviewed their shows. Apart from Vanessa Bell, six other women artists produced posters for Shell, including Pamela Drew, Eve Kirk, Cathleen Mann and Margaret Brynhild Parker. The reason for the prominence of women in poster design is a potentially interesting area of research that could illuminate issues of female participation in the arts, gender prejudice, and education in the 1930s. ‡

By the time of WW2 Clifford Ellis was the headmaster of the Bath School of Art. He then served as a camouflage artist and official war artist with Grenadier Guards during Second World War.

Rosemary too was a official war artist working on the Recording Britain project with Clifford. Above is a beautiful view of a graveyard in Bath. It is one of the most gothic and romantic works she produced and looks more like a John Piper study. The painting above ‘View of Holcombe from Dawlish’ also has elements of John Piper in it: the loosely constructed house, the abstract boat off the shore and the dark sky.

The couple would also be selected as artists for the Lyon’s Lithograph series in 1947. The aim was to produce large lithographs that could cheaply be bought by members of the public but also be displayed to brighten up the tearooms Lyons owned. The Ellis’s submission of Teignmouth was described as almost being a painting rather than a lithograph.

Between 1946 and 1955 the company commissioned three series of prints, some 40 in all, from most of the leading British artists of the day. The lithographs were not advertising per se (the Lyons name only appeared in small type at the bottom of each), but they were branding by association.

To help, he brought in the artist Barnett Freedman as the technical director. He had long experience as a lithographer and had been both an official war artist and a teacher at the Royal College of Art. ♠

The painting of Teignmouth Bay from 1945 would have been a study around the time of the Lyons lithograph above but looking back and forth onto each other.

Teignmouth Painted by Clifford and Rosemary Ellis: For the lithographs worked up at Chromoworks from originals, (Barnett) Freedman’s input at the proofing stage was crucial. In response to his comments about the proof of Teignmouth, for example, (Frank) Oppenheimer noted at the printers that they would ‘try a light grey printing over the sails etc … alter the colour of the light brown high light in the hills in printing [and] … make the colour of the sky and sea slightly warmer. ♣

Rosemary Ellis worked with her husband Clifford to design over 60 of the dust jackets for the New Naturalist book series, after volume 71 the artist Robert Gillmor took over.

Today these jackets are their best-known work, though book lovers may know some of their other jackets before and after the war, for the Collins Countryside series in the 1970s, or their design for John Betjeman’s Collins Guide to English Parish Churches. Within the art worked they are remembered more as innovative teachers, Clifford Ellis having run the Academy of Art at Corsham Court for a quarter of a century with his wife Rosemary as a leading member of the staff. †

The pair also designed two of the covers to the King Penguin Series.

The original idea for King Penguins came from the small Insel-Verlag books which were published in Germany before the war. Why, we felt, should there not be a similar series of books in this country? The experiment, started a few weeks after war broke out, turned out to be successful. One of the most distinctive features of this series is their decorative covers. ♦

The King Penguin series itself struggled to make money, because of the costs of colour printing, and it was cancelled in 1957. ♥