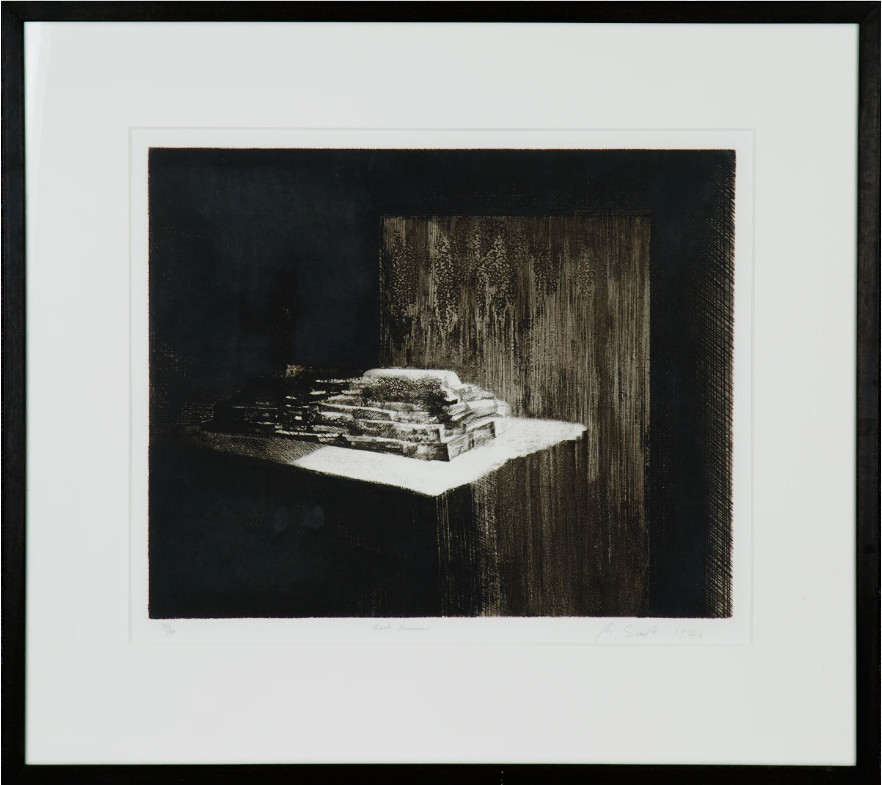 Etching. A limited edition of 60.

Michael Sandle studied at Douglas School of Art and Technology, Isle of Man from 1951 to 1954 and the Slade School of Fine Art, London from 1956 to 1959. In his early work he emphasised craftsmanship and the search for symbols, rejecting the formalism increasingly common in sculpture of the period. Throughout the 1960s and ’70s he worked on a small range of individual works in which he explored abstract and figurative idioms.

Following his appointment as professor of sculpture at Pforzheim, Germany in 1973, and at Karlsruhe, Germany in 1980, Sandle’s work became more monumental, partly in response to a series of significant commemorative commissions. His work voices criticisms of what Sandle describes as “the heroic decadence” of capitalism, in particular its appetite for global conflict. He has also attacked the media for packaging and sanitising the destructiveness of war. He was elected Fellow of the Royal Society of British Sculptors in 1994.

He has exhibited in numerous group exhibitions in Britain and internationally including the 5th Paris Biennale, 4th and 6th Documenta and Sao Paulo Biennale.

The etching shows Sandle’s studio with the bronze sculpture above on the table.

Michael Sandle was born in Weymouth, Dorset. His father was serving in the Royal Navy, and he was christened on HMS Ark Royal. His family’s home in Plymouth was bombed in the Second World War, and he grew up on the Isle of Man, where his father had been stationed in 1942. From 1951 to 1954, he studied at Douglas School of Art and Technology on the Isle of Man, and was then conscripted for two years’ National Service in the Royal Artillery.

After attending evening classes at Chester College of Art, he studied printmaking in London at the Slade School of Fine Art from 1956 to 1959, where he was taught etching by Anthony Gross, Lynton Lamb, and Ceri Richards. He was also taught by Andrew Forge, Lucian Freud, and Claude Rogers. After travelling to Italy and Paris, Sandle taught at various British art schools in the 1960s. Originally a painter and draughtsman, in the 1960s, he gravitated towards sculpture.

From 1970 to 1973, Sandle lived in Canada, where he was a visiting associate professor at the University of Calgary until 1971 and at the University of British Columbia from 1971 to 1972. In 1973, he moved to Germany, and taught in Pforzheim and Berlin. He became professor of sculpture at the Akademie der Bildenden Künste in Karlsruhe in 1980. From 1976 to 1982, Sandle was a member of the faculty of engraving at the British School in Rome. In 1982, he was elected an Associate of the Royal Academy, and in 1989 a full academician. After moving to Devon, he returned to London in 2003.

Two of Sandle’s smaller sculptural works are held by the Tate Gallery: “A Twentieth Century Memorial” (1971–78) and one of the five casts of his work “Der Trommler” (The Drummer) (1985, cast 1987).His public works include:

He won the Hugh Casson Drawing Prize for his Iraq Triptych, a drawing showing Tony and Cherie Blair naked.