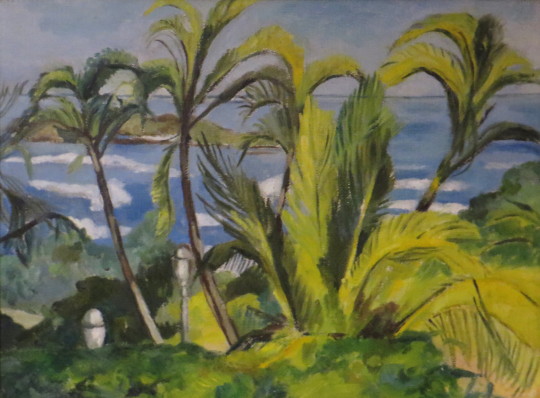 Jane McLean Vestey lived at Thurlow Hall, Great Thurlow, Haverhill, Suffolk. The daughter of Ronald Arthur Vestey and Florence Ellen Vestey (nee McLean Luis). Jane was born on the 8th April 1928 into the famous Vestey family of Blue Star Line Shipping, her father being a Director. At the age of 10 Jane named and launched the Blue Star line ship the ‘Adelaide Star’.

Mr. R.A. Vestey, on behalf of the Blue Star Line, acknowledged and then proposed the toast of “The Builders.”At the ceremony which followed, Sir Allan Grant, a director of John Brown & Company, presented an antique diamond feather brooch of 1800 to Miss Jane Vestey, who had named and launched the Adelaide Star. †

She travelled to Brazil on 13th April 1950 on a temporary visa. In Brazil her family had a fleet of ships. The Painting ‘Guaraja, Brazil’ would have been painted at this time. It is assumed that because her family owned a shipping line, travel for her was less of an issue than it might have been for other people at the time.

Jane Vestey married John Richard Baddeley (son of a Solicitor) on 23 June 1956. They had three children, Mark, Melissa and Edward.

John Minton had been painting tropical scenes in 1950 and was so enthused by them for the next few years his views of Jamaica dominated his work.

‘Guaraja Beach’ was exhibited in the Redfern Gallery in 1951, Catalogue Number 124. It was bought by S.J.Dale Esq on 2nd May, 1951. Other artists showing at the exhibition were: Thomas Buford Meteyard, Roy Hobdell and Gordon Crook.